The study showed that the vertical scar of Z plasty was visible and annoying to not a few patients.

The skin redraping method made a scar in the less visible area than the Z plasty.

The redraping has smaller effect to release the vertical skin tension of the epicanthal fold; therefore, this method tends to create in-fold type of double fold.

The redraping method requires the trimming of lower eyelid skin; this maneuver had a potential risk for unfavorable downward expansion of the caruncle.

Since 2011, I have used modified method of skin redraping.

The resultant scar is in L shaped, which is similar to that of skin redraping.

This modified method is more effective to release the vertical tension in the medial canthal region.

The technical details and clinical results will be demonstrated in this paper. 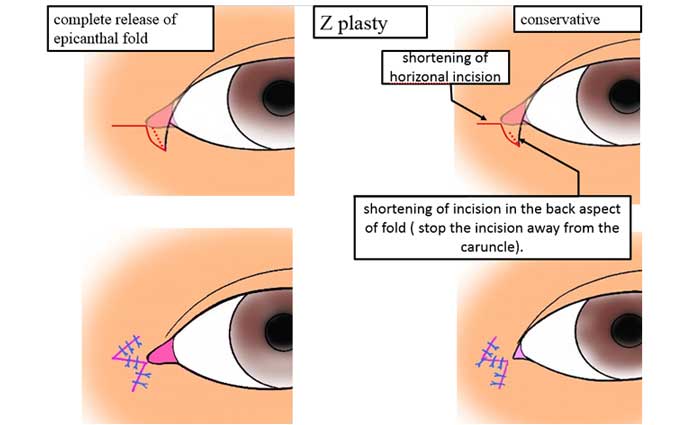 For Z plasty, I make the horizontal incision short, and also shorten the incision on the back side of the fold t. This means that I stop the incision away from the caruncle by at least 1mm, usually 2 to 3 mm, before the caruncle 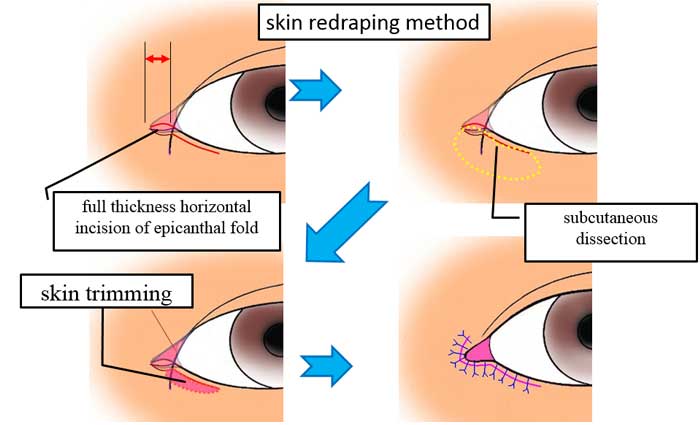 Basically this technique cuts the fold horizontally in the full thickness fashion. The incision line extends into the lower eyelid. The subcutaneous dissection is performed and a small amount of muscle is excised in the medial corner. The skin is trimmed in the upper part of the fold, just like remove a dog ear. Another trimming is done along the lower eyelid incision. In case of redraping method, I make horizontal incision of the fold shorter to preserve a part of the epicanthal fold.

・The skin redraping method makes a scar in the less visible area than the Z plasty.

・The redraping has smaller effect to release the vertical skin tension ; therefore, there is a chance of creating in-fold line after redraping
・The Z plasty is more reliable for creating out-fold line. 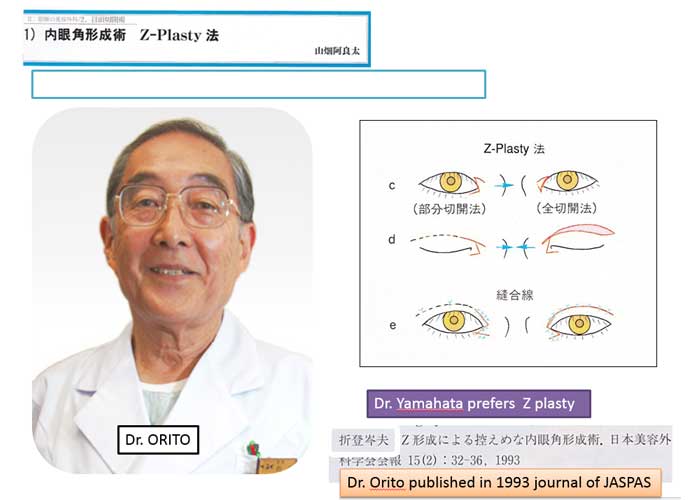 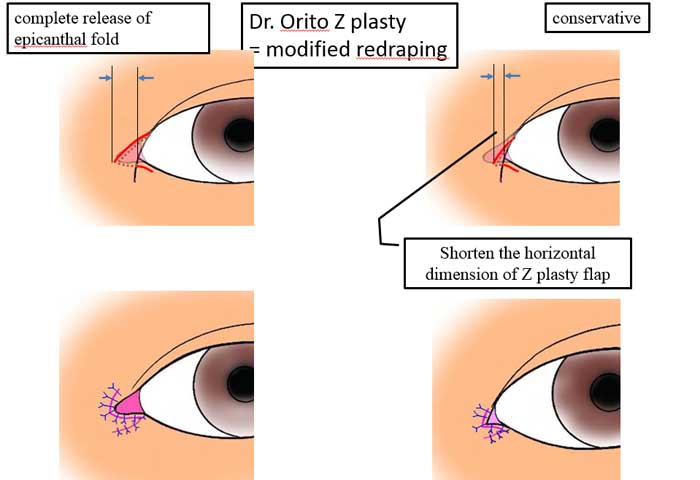 ORITO method is a kind of Z plasty. In order to reduce the mongolian fold conservatively, I make the horizontal dimension of the Z flap shorter. 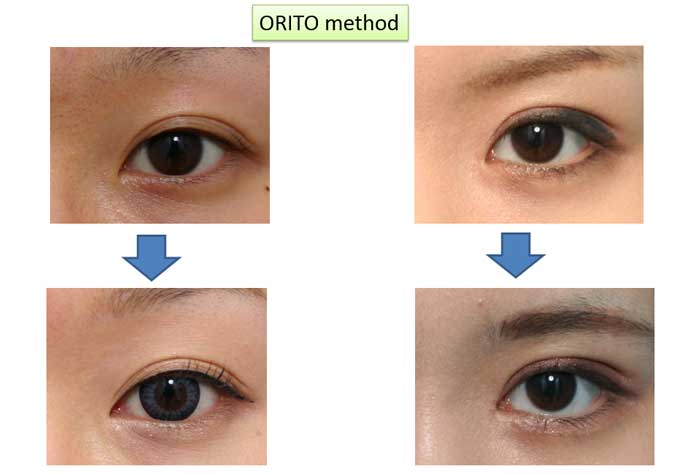 The epicanthoplasty is a common procedure in Oriental blepharoplasty.

Over-show of caruncle can cause patients’ dissatisfaction.

This paper presents my clinical experiences of reconstructing the epicanthal fold.

I use two different techniques. One is using Z plasty which is a reverse style of Z epicanthoplasty presented by Park JI.

The other technique utilizes a hinge flap of medial skin and transposition flap from the lower eyelid; this was presented by Japanese plastic surgeon, Dr. Doi.

Z plasty technique creates an epicanthal fold which is limited in size.

I use Z plasty for the patients who request coverage of the exposed caruncle by 1 mm.

For those require larger coverage of caruncle, I use transposition flap since this technique can provide larger tissue to the epicanthal region.

I had an experience of partial flap loss in transposition technique.

It was probably due to jeopardized blood supply to the flap which was elevated based on the scar from the previous epicanthoplasty operation.

I have currently applied delay procedure if the scar crosses the flap.

The surgical technique and clinical outcomes are shown in detail. 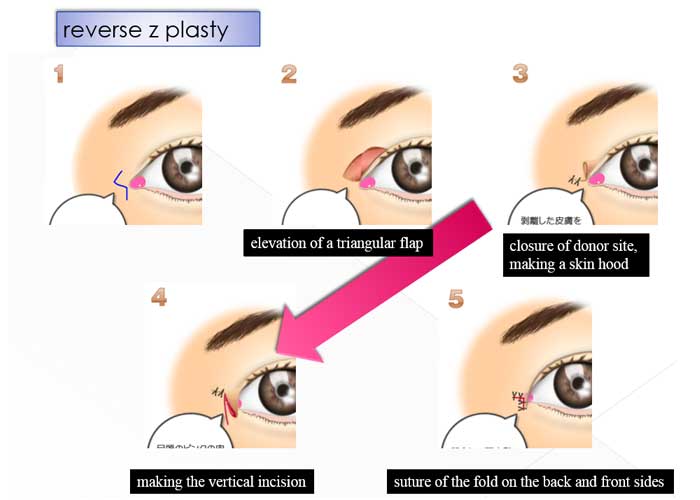 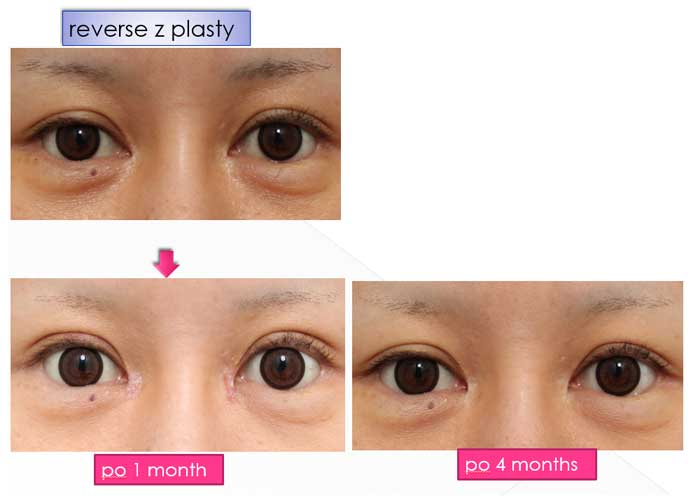 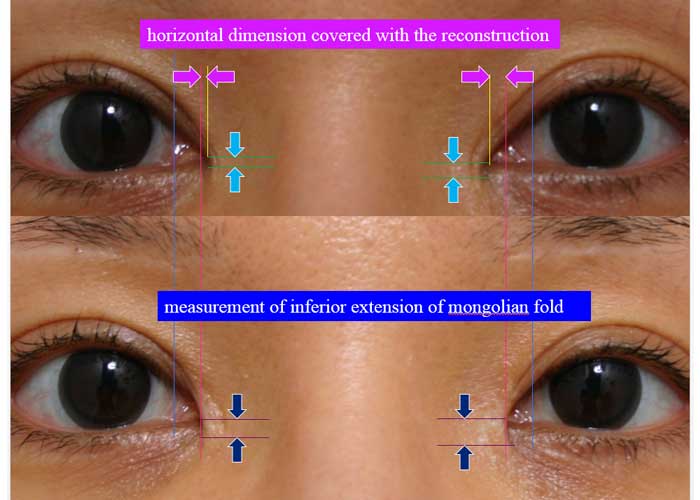 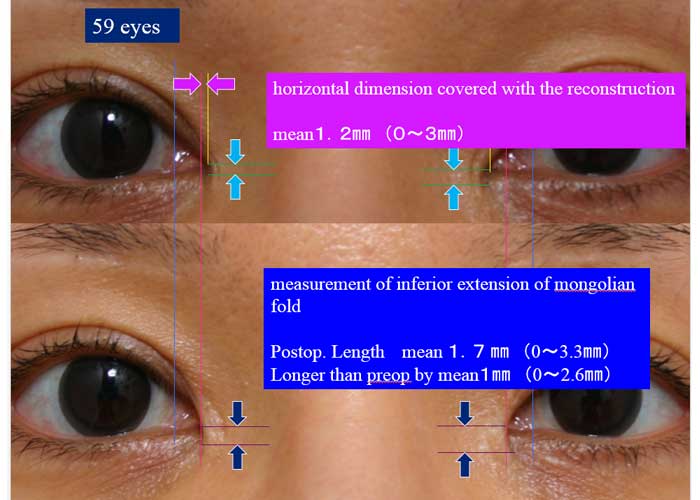 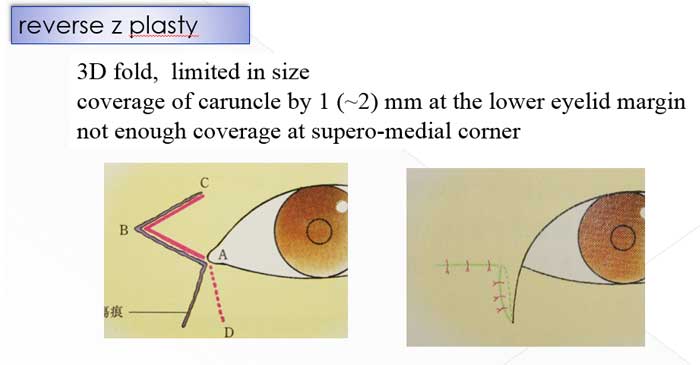 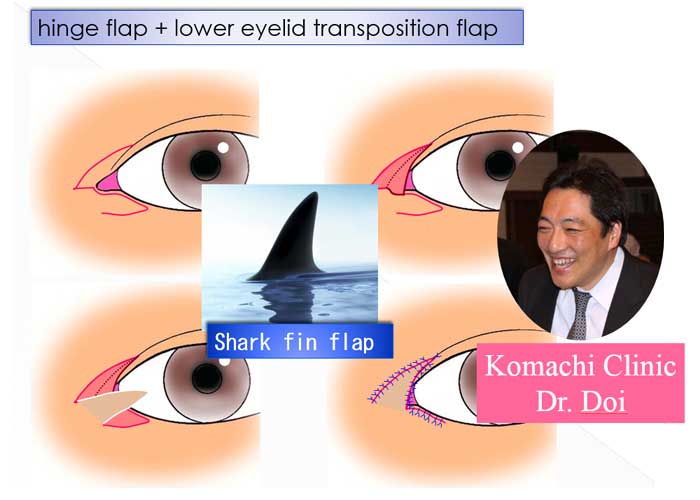 3D fold, large size
coverage of caruncle by 2~3 mm at the lower eyelid margin round curve at the infero-medial corner