This study was conducted in order to clarify the pros and cons of two different methods of medial epicanthoplasty.

One is root Z plasty and the other is skin redraping method.

The results was retrospectively evaluated using clinical photographs and clinical charts in terms of development of hypertrophic scar, final appearance of scar, shape of medial canthus, shape of double fold ( in-fold or out-fold) and request for revision surgery.

3 cases in Z plasty group complained of vertical scar lying in the infero-medial area of the medial canthal region (figure 01).

6 cases of redraping group develops in-fold type of double fold although creation of out-fold type was planned for them (figure 02).

The skin redraping method could make the sharp angle at the medial corner dull or round (figure 04).

This study has shown that the skin redraping method makes a scar in the less visible area than the Z plasty.

The redraping has smaller effect to release the vertical skin tension of the epicanthal fold, therefore, this method tends to create in-fold type of double fold.

The Z plasty is more reliable for creating out-fold type of double fold.

It is important to take into account the contour line from the forehead to the nasal dorsum.

From this point of view, the nasal radix (sellion) is the key point.

For Oriental rhinoplasty, the radix should be located at the pupil, which is most natural, or at the slightly higher position up to the eyelashes.

The radix should be depressed or at an even level compared to the glabella.

The standard dorsal augmentation raises the radix anteriorly and superiorly.

Excessive or careless augmentation raise the radix over the normal range mentioned above, making an unnatural look.

In order to avoid the unnatural outcome, we have introduce the glabella augmentation and forehead augmentation in Oriental rhinoplasty.

The most imperative part is the presurgical planning to determine the amount and shape of augmentation requested for each patient; this is achieved using injection of short-lasting hyaluronic acid.

The increased thickness of the forehead is measured and used as a blueprint of the operation.

3D skull model is manufactured based on CT-scan in each patient.

The custom made silicone implant is made to raise the forehead, glabella and nasal dorsum with the thickness obtained in the simulation.

The bottom surface of the implant can fit in with the skull and dorsal cartilage vault of each patient.

The silicone implant is inserted in position using a 4 cm long incision in the frontal area and endonasal or open rhinoplasty incision.

The upper eyelid incision cuold be very helpful to visualize the accurate positioning at the superior orbital rim.

In case the augmentation was requested in the lateral side of the forehead beyond the temporal fusion line, we used occipital coronal incision to place the implant under the temporal muscle.

The forehead augmentation was effective to give the oriental eye a sculptured feature.

It was also found useful to make a harmony in the projection of glabella and nasal root.

The simulation with hyaluronic acid was very valuable to provide the patient with prospective and the surgeon with precise surgical planning.

3.Lecture by the slide 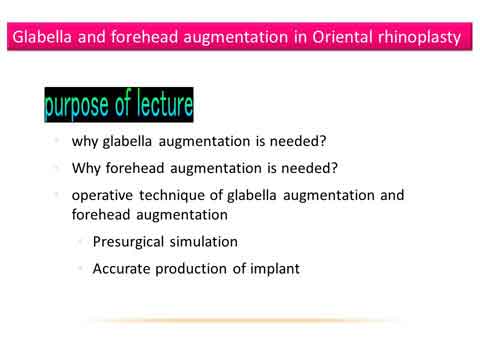 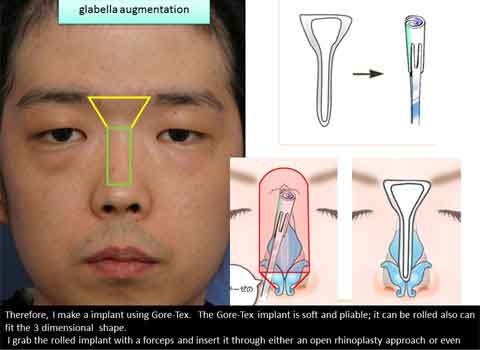 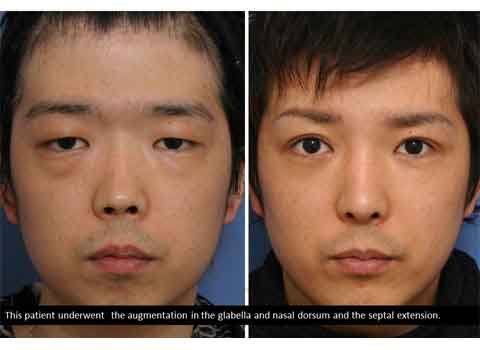 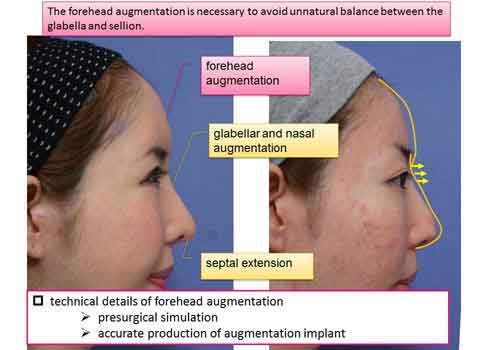 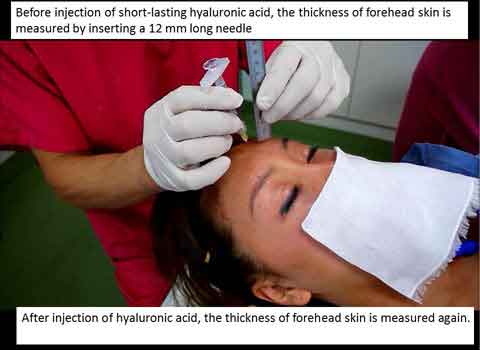 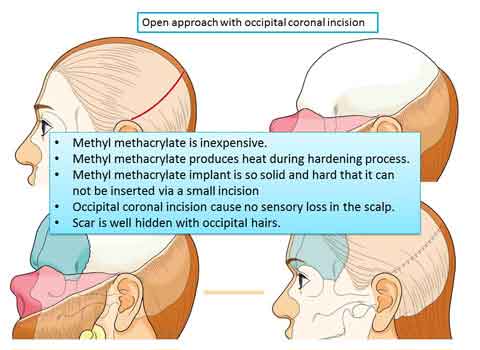 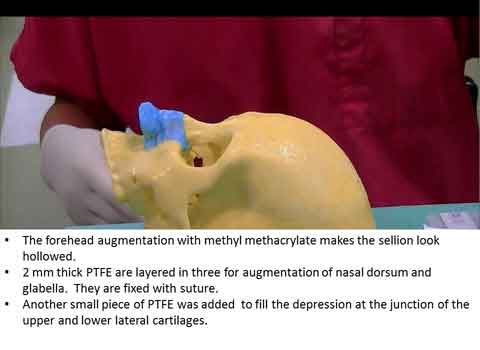 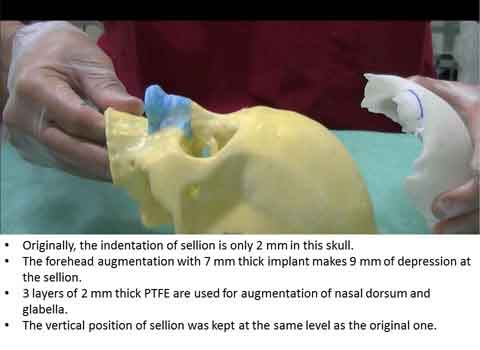 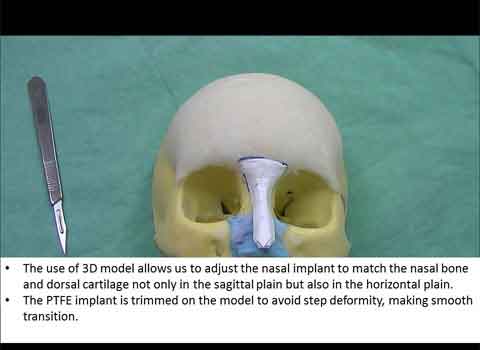 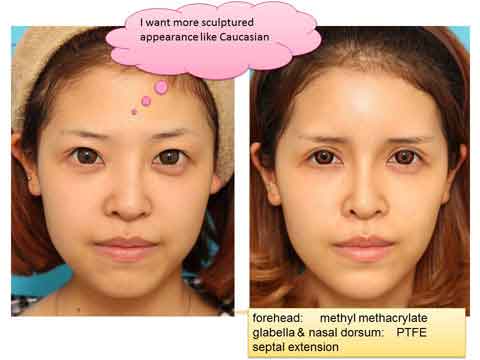 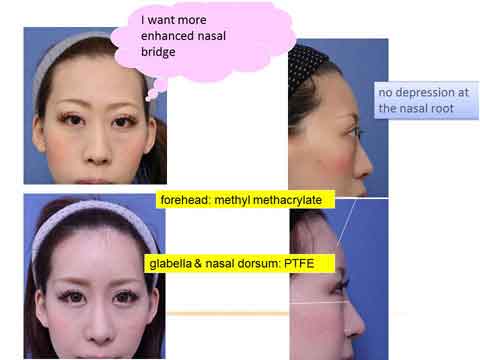 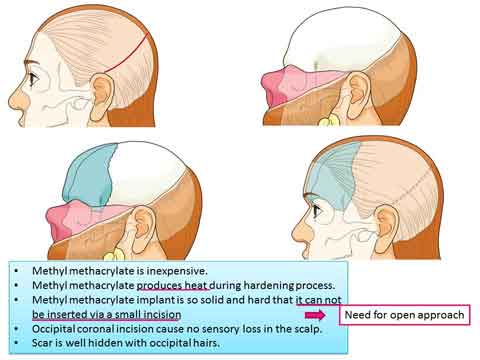 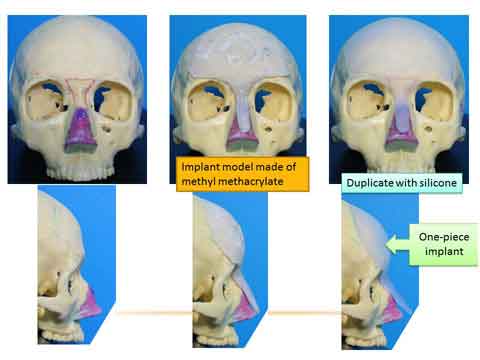 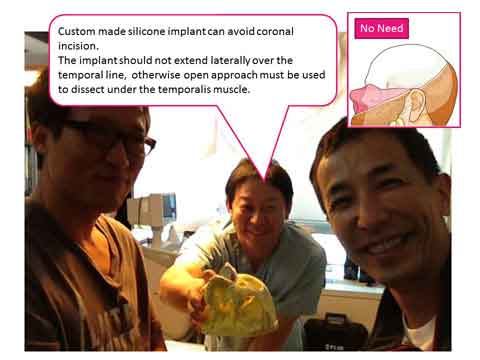 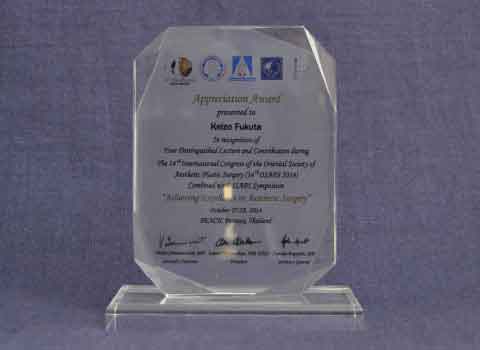