1) Anatomical location of the retaining ligaments 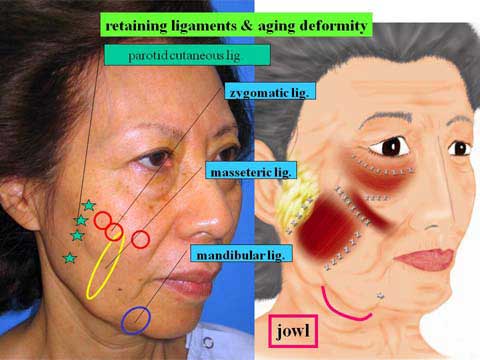 The skin and subcutaneous fat of the face adhere to the underlying deep structure such as the parotid gland, deep temporalis fascia, masseteric muscle and facial skeleton.

The strength of adherence is not uniform all over the face.

The retaining ligaments, which are present in limited areas, anchor the skin to the deep tissue.

Those ligaments originate from the deep structure, penetrate the SMAS and insert into the dermis with many ramifications.

Therefore, the ligaments provide with strong adhesion between the skin and SMAS and also between SMAS and deep structure.

The parotid cutaneous ligaments connect the preauricular skin to the parotid fascia along the anterior margin of the parotid gland.

The orbital retaining ligament adheres to the inferior orbital rim.

2) A role of the retaining ligaments in aging face 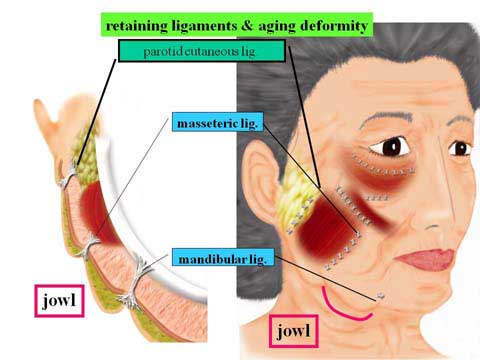 As aging, the skin and subcutaneous fat lose the firmness and become difficult to maintain their shape while resisting against the gravity.

The adherence of the skin to the underlying structure is not uniform in strength, as the retaining ligaments attach the skin to the facial skeleton or fascia in limited areas.

The skin over those ligaments shows minimal displacement under the influence of gravitation.

The skin adjacent to the retaining ligaments loosely adheres to the deep tissues and shows greater ptosis.

The retaining ligaments hold the soft tissue falling down from the above.

This creates depressions or grooves at the skin over the retaining ligaments and bulges in the neighboring area.

The jowl deformity is a bulge along the mandibular border, which develops due to sagging of the soft tissue between the masseteric ligaments and mandibular ligament.

The lower border of jawl overlies the mandibular ligament.

The malar pouch is a bulge due to ptosis of the soft tissue between the orbital retaining ligaments and zygomatic ligaments.

Thus, the face develops multiple grooves (concavities) and bulges (convexities) on the surface with aging.

3) A role of the retaining ligament on facelift 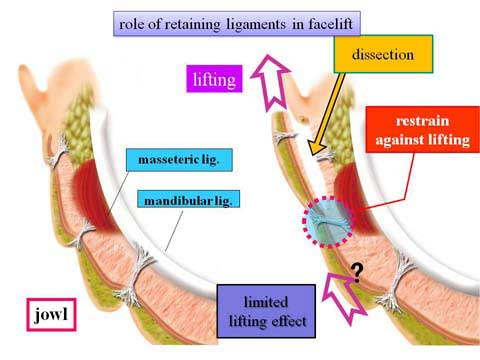 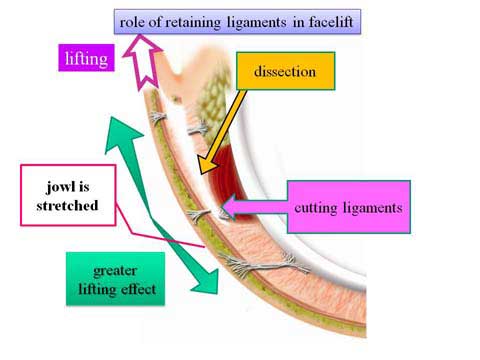 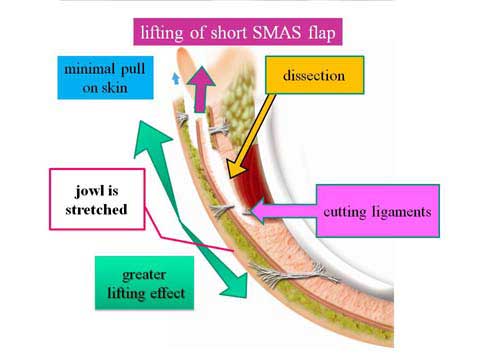 The purpose of the facelift procedure is to pull up the sagging skin and subcutaneous fat and to change a facial contour with bulges and grooves into a smooth one.

The facelift is a procedure which excises the skin in front of the ear; thereby the operation can stretch the facial skin in the lateral cheek with greater tension.

Because the skin is an elastic tissue, the traction power of facelift, which is applied to the lateral edge of skin flap, is less efficient in the central part of the face.

It is considered that lifting of the central tissue is more effective if traction is applied to the tissue in the more medial region away from the ear.

The use of SMAS allows for traction of more anterior tissue than the preauricular skin incision line.

It is, therefore, essential to release the zygomatic ligaments and masseteric ligaments in order to transmit the lifting power to the medial tissue. 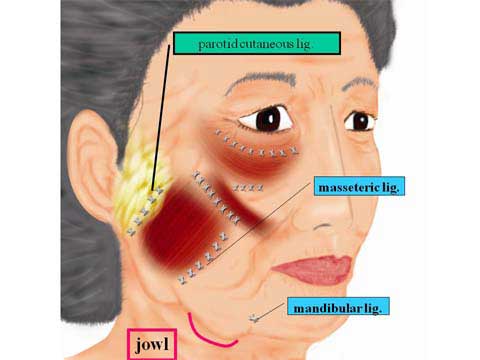 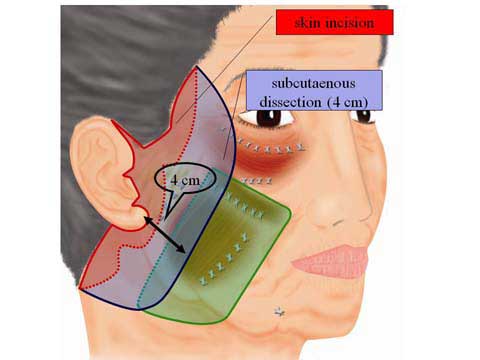 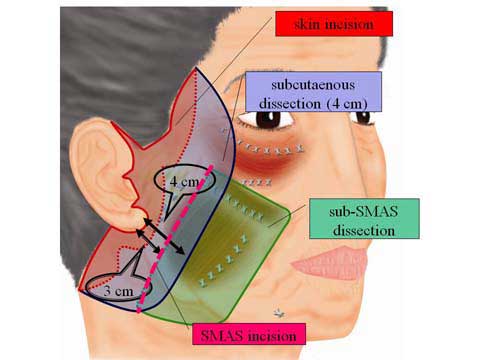 In order to provide stronger lift effect to the central facial zone, traction should be applied to the medial tissue.

Therefore, the lateral edge of SMAS flap should be made medially apart from the ear.

The retaining ligaments are distinctive fibrous band which has strong adhesion to SMAS and skin.

Suspension of masseteric ligaments and zygomatic ligaments is a theoretically appropriate technique to provide strong lift in the medial face.

I have found that practically this procedure is not worth adapting because it is complicated and time-consuming.

Firstly, this treatment requires the ligation of each ligament before it is cut to secure the ends.

Secondly, suspension of each end might produce a dimple if excess traction is applied.

In case dimples occur, loosening of suspension or release of subcutaneous fibrous tissue is necessary.

I have no longer used direct suspension of masseteric ligaments.

Currently I have been using zygomatic ligaments for suspension.

4) Correction of bulges and grooves caused by aging

It is said that facial skin sags with aging.

What is sagging? With aging, skin and subcutaneous fat lose the firmness and they become vulnerable to gravity.

The skin is stretched and expands its surface are.

Although the cheek skin shows downward ptosis in the up-right position, the skin surface area does not expand only in the vertical direction, but also in the horizontal direction.

In sum, the stretching takes place in two dimensions.

The expansion does not appear uniformly over the whole face.

The skin over the insertion of the retaining ligaments develops minimal expansion.

The skin surrounded by the retaining ligaments expands to a certain degree in two dimensions, which causes bulging out.

As a result of aging process, multiple protrusions develop over the facial skin just like a buttoned-up sofa.

In addition, subcutaneous fat lose the volume with aging.

As the volume reduction occurs unevenly over the facial surface, greater diminution of fat causes depression evidently in certain areas.

Thus, aging change of surface contour of the face takes place not in one dimension but in three dimensions; expansion of skin surface area and change in fat thickness.

Although release of restraining effect of the retaining ligaments and use of short SMAS flap provide greater stretch to the skin in the medial face, this lift is limited in one direction only and is not sufficient to correct the three-dimensional deformity.

To achieve improvement in three-dimensional deformity, liposuction and lipofilling are indispensable. 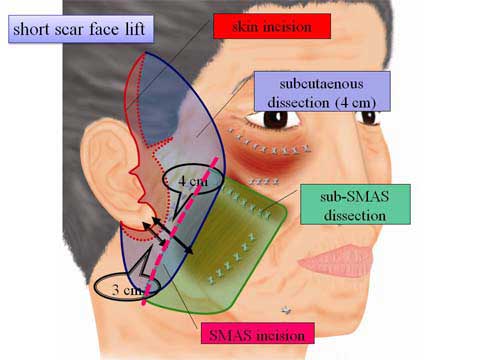 In case of no significant neck sagging, the facelift with a short scar is feasible.

This procedure eliminates an incision along the occipital hairline.

Instead of using the temporal hairline incision, an incision is made in the hair-baring skin the temporal area. 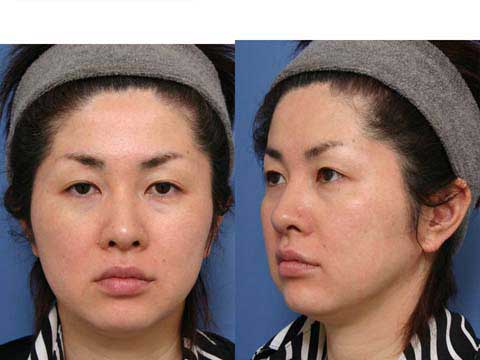 A 42 year old female presented with mild jawl deformity and heavy look in the upper eyelid.

For her preoperative planning, traction of skin in front of the ear with fingers demonstrates the possible result from the short scar facelift.

The simulation shows budging in the lateral cheek in spite of the strong pull.

In order to make smaller the bulge which will remain after facelift alone, the combination of liposuction with facelift is useful.

The middle picture shows the simulation of facelift with temporal lift, which make the lateral canthus look sharper.

The patient denied to have temporal lift. 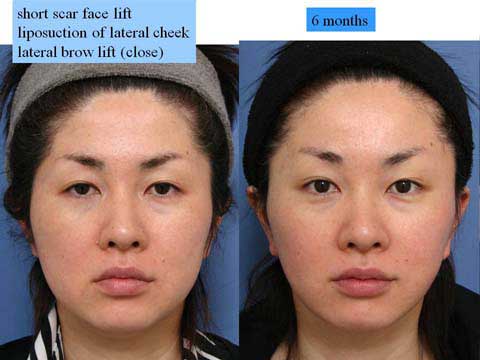 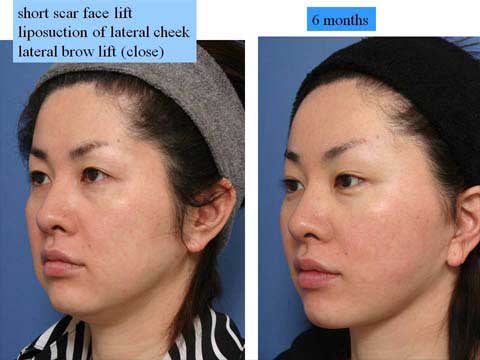 6 months after the short scar facelift with liposuction in the lateral cheek and lateral brow lift with close approach.

The middle picture shows simulation of facelift for the lateral cheek.

The right picture shows simulation of facelift and temporal lift which provide the lateral canthal region and lower eyelid with pull in the super-lateral direction.

The patient chose to have temporal lift with pulled appearance of the lateral canthus. 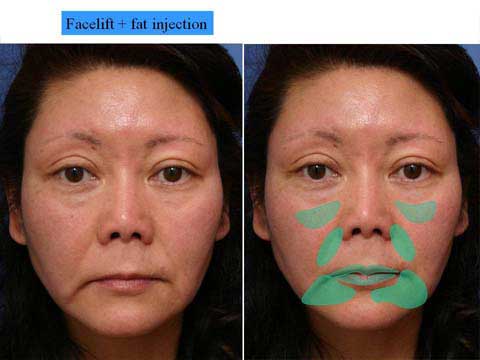 The green marking demonstrates the area for which lipofilling is planned. 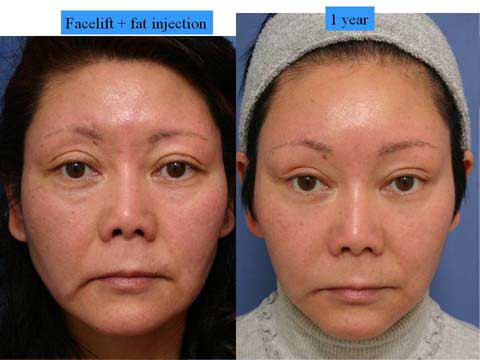 One year after facelift and temporal lift with lipo-injection.