The Oriental people have the Mongolian slant of the orbital fissure.

The lateral canthus is vertically higher in position when compared with the medial canthus.

Many of the Oriental eyes have a fairly straight line or minimally curved line with small downward convexity of the lower eyelid margin.

Some have a more curved line with downward convexity in the lateral portion of the lower eyelid.

Some have round curve with natural lower scleral show.

There are requests, although they are not very common, to make the lower eyelid margin lower and rounder.

The patients’ expectation is to make eye look larger and rounder from this morphological change.

The popular request among them is to lower the lower eyelid margin in the lateral portion, lateral to the cornea, while keeping the lateral canthus in the position of Mongolian slant.

The postoperative lowermost point of the lower eyelid margin could be at the midpupil line, lateral margin of the cornea, or further lateral to the cornea.

This has be determined preoperatively according to each patient’s request and marked on the lower eyelid skin.

The operation is performed with transconjunctival approach.

An incision at the lower margin of the tarsus of the lower eyelid extends from the lateral corner to the medial corner.

Although this incision can be shorter medially, a long one provides us with wide exposure and good anatomical orientation.

The dissection beneath the orbicularis oculi muscle is carried out to expose the orbital septum overlying the bulge of the central and lateral compartments of the orbital fat.

The orbital septum of the lower eyelid starts from the inferior orbital rim and extends superiorly close to the lower margin of the tarsus until it rolls backward to connect the capsuropalpebral fascia.

The septum is incised horizontally near the upper margin. The superior side of the incised septum is flipped up, which discloses the direct continuity of the septum and capsuropalpebral fascia.

The downward retraction of the inferior side of the septum exposes the orbital fat pad.

The orbital fat can be excised to correct the baggy eyelid if it is indicated.

The advancement of the capsuropalpebral fascia is performed at the planned postoperative lowermost point.

The suture is temporally tied and the amount of lowering and shape of the eyelid margin is checked.

If the inferior traction is not enough, the tarsus is sutured to the further lower position on the capsuropalpebral fascia.

The excess mucosa and capsuropalpebral fascia are excised by about 5 mm at the planned lowest point.

The mucosa is closed with 6-0 monocryl suture without repair of the septum.

This procedure shortened the posterior lamella of the lower eyelid, thereby creating an excess of the anterior lamella.

The excess of the skin and orbicularis muscle produced has never developed the sagging or increased wrinkles of the lower eyelid.

The bulging of the pretarsal portion of the eyelid has been enhanced in some cases.

The entropion with irritation of eye globe with eyelash has developed in about 10 % of cases.

It occurred in those who had had subclinical entropion preoperatively or those who underwent greater lowering of the eyelid particularly below the cornea.

The entropion required the surgical correction with subcilial skin excision. 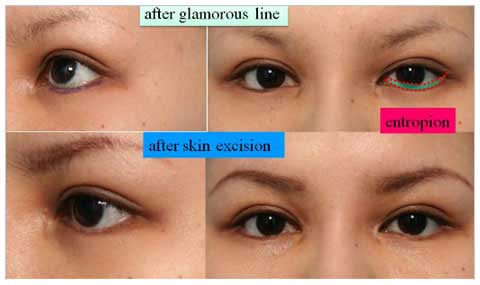