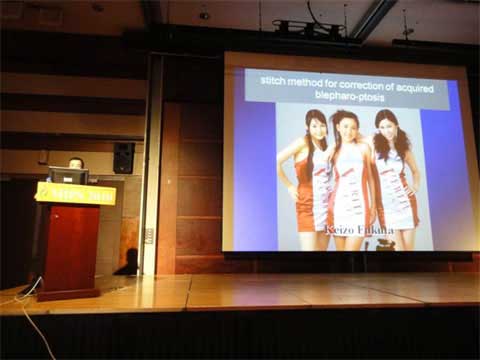 I take a question 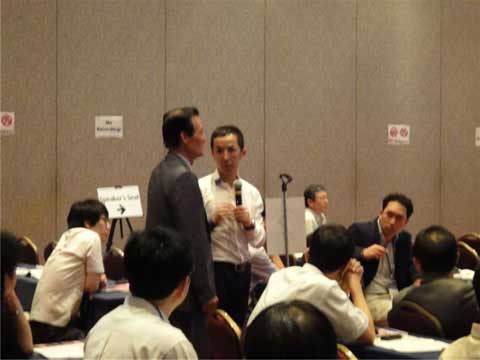 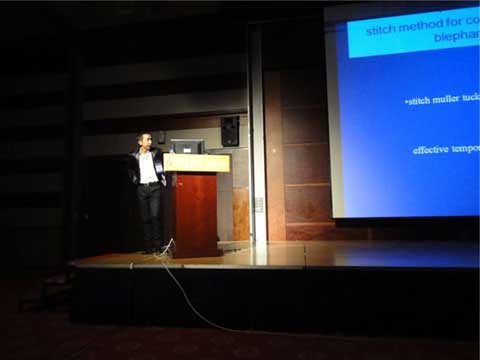 This paper presents the use of stitch technique to correct acquired blepharo-ptosis without any incision.

A traction suture ( 6-0 nylon) is placed through the conjunctiva of the cal de sac at 7 mm above the superior margin of the tarsal plate.

The suture is inserted to a exit point and brought out at the superior margin of tarsal plate.

The suture is then inserted in the tarsal plate at 1 mm apart from the exit point and brought out through the first entering point on the conjunctiva.

In this way, a placation suture is placed under the conjunctiva between the upper margin of tarsus and cal de sac in a triangular fashion.

The ligation of the suture plicates the conjunctiva and Muller muscle longitudinally by 14 mm. The amount of shortening has to be adjusted in each case.

7-0 nylon suture is buried under the conjunctiva in a triangular fashion.

The vertical distance of the conjunctiva to be plicated is 14 mm in many of cases, but needs be changed for each case.

Although long term result is still unclarified, follow-up of some of my cases has revealed the lasting of ptosis correction for 3 years.

This procedure was found useful to correct asymmetry of ptosis after levator aponeurosis repair via the incisional approach.

The swelling after the stitch ptosis correction was mild in most of cases.

Other possible complications are ecchymosis, asymmetry, over-correction or under-correction.

The width of double fold became narrower after the ptosis repair.

Stitch upper blepharoplasty was therefore performed depending on the patients’ request.

Although stitch blepharoplasty can be performed at the same time, I prefer it subsequently at a longer than 2 weeks interval. 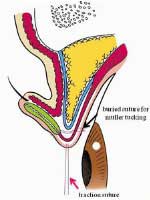 Under traction of cal de sac conjunctiva with suture, a 7-0 nylon suture is placed between the upper margin of tarsal plate and superior cal de sac.

A placation suture is placed in a triangular fashion under the conjunctiva. 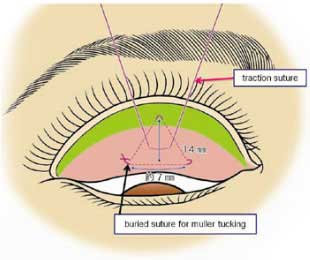 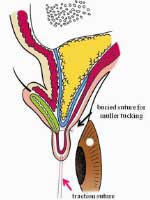 The ligation of buried suture shortened the conjunctiva and Muller muscle. 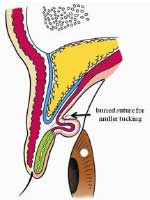 A pillar on the conjunctiva, which was made by placation, does not cause discomfort to the patient and it shrinks with time.