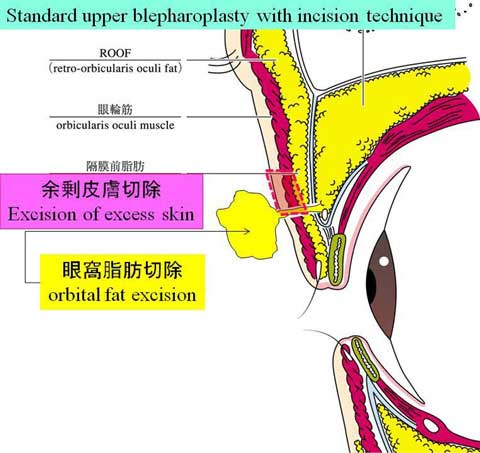 The standard procedure of upper blepharoplasty involves skin incision at the planned double fold line, excision of excess skin if necessary, and removal of orbital fat. 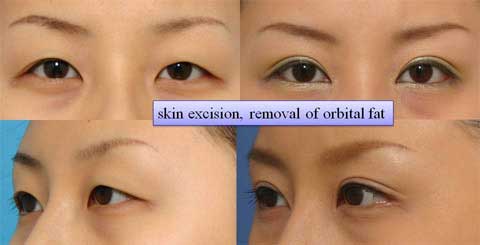 Excision of orbital fat is helpful to create a sharp double fold.

The patient presents with excess hanging skin over the eyelashes.

Although hanging skin gives bulky looking to the upper eyelid, she does not have a lot of volume in the eyelid.

These two cases indicate that the excision of orbital fat is not enough to correct bulky eyelid. 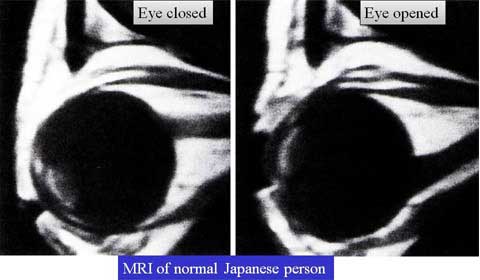 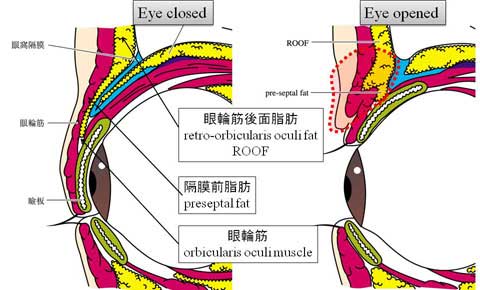 These diagrams are made from MRI images.

The orbital fat lying behind the septum (membranous structure in light blue color) is not really thick when the eye is closed.

There are other fat tissues (the preseptal fat and ROOF) in front of septum.

Although the preseptal fat, ROOF and also orbicularis oculi muscle are thin structure with eye closed, they are squeezed and provide a bulk to the upper eyelid when the eye is opened. 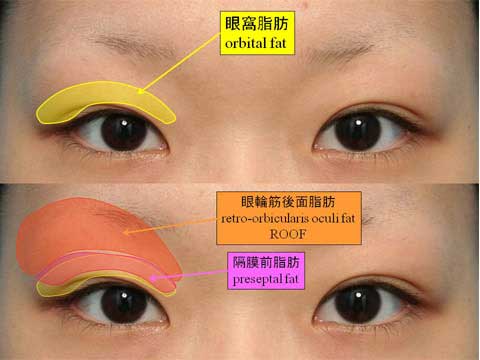 The fullness is made by the presence of orbital fat, preseptal fat and ROOF.

The orbicularis oculi muscle is partly related to the thickness just above the double fold. 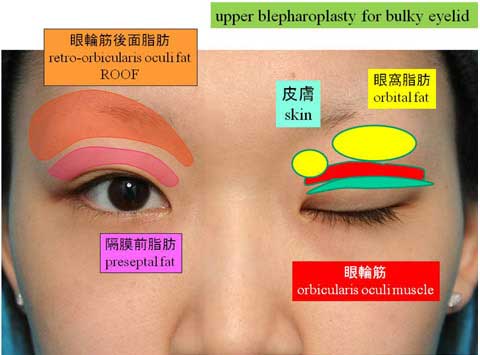 Upper blepharoplasty for bulky eyelid should involve the excision of excess skin, excision of orbital fat, preseptal fat and ROOF and excision of about 10 mm wide orbicularis oculi muscle band just above the double fold. 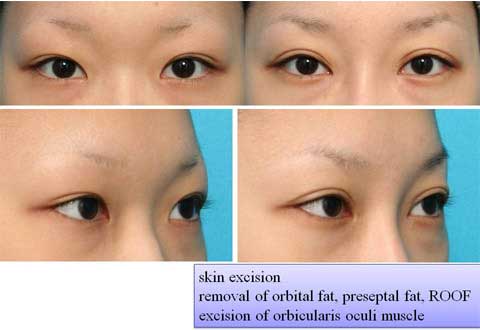 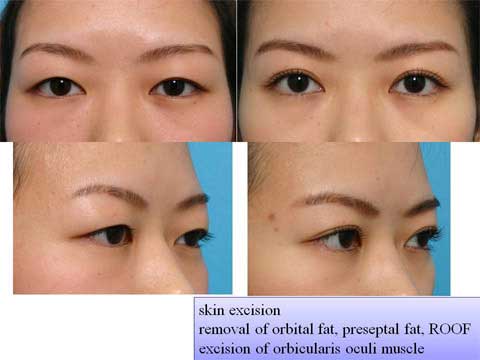 These clinical cases strongly suggest that it is effective to excise the preseptal fat, ROOF and orbicularis oculi muscle in addition to orbital fat for the correction of bulky upper eyelid 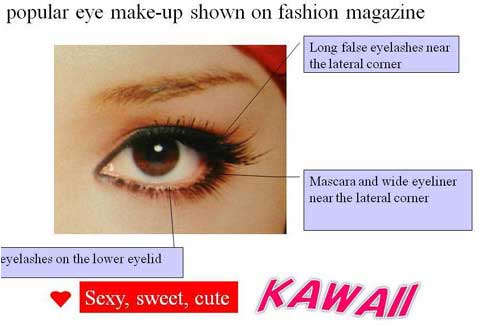 Long false eyelashes near the lateral corner help to enhance the lateral extension of eye.

Mascara and wide eyeliner near the lateral corner as well as false eyelashes on the lower eyelid help to enhance the lower extension of eye.

Those who wear eye make-up in this fashion wish to have almond shaped eye, down slanting eye, droopy eye and eye with long slit at the outer corner. 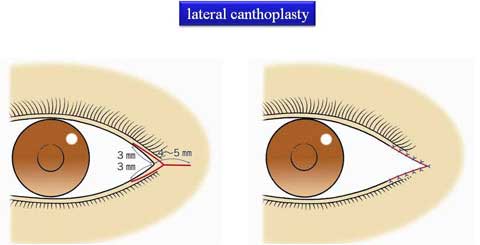 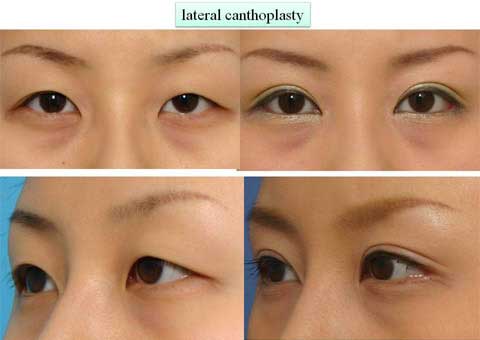 A case treated with lateral canthoplasty

Lateral canthoplasty is the procedure to provide lateral elongation at the lateral corner and downward enlargement of lower lateral portion of the orbital fissure.

The lateral sclera show will become larger after lateral canthoplasty. 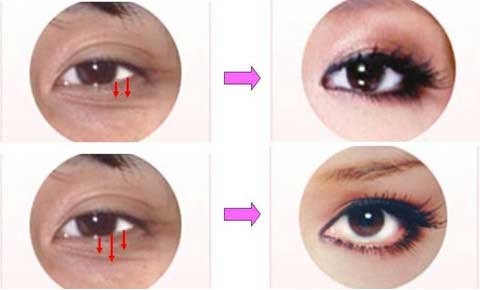 Glamorous line procedure can give the lower eyelid margin more round convex curvature.

The location of the lowest point should be determined according to the desire of each patient. 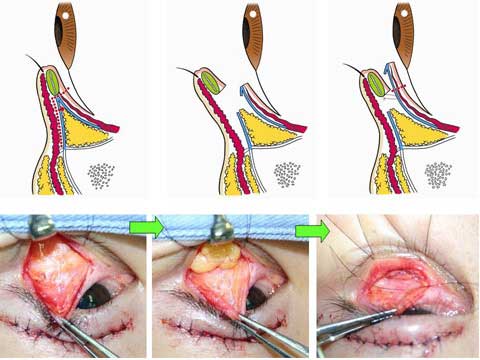 The transconjunctival incision is made at the lower margin of the tarsal plate.

The orbital septum is cut at the superior margin and exposed orbital fat is retracted downward to reveal capsuropalpebral fascia (CPF).

The CPF is advanced and fixed to the tarsal plate at three points; at the level of pupil, at the lateral limb and further lateral between the limb and lateral corner of the orbital fissure.

The three sutures are tied temporarily and the position and shape of the lower eyelid margin are estimated.

The anchoring points on CPF have to be adjusted to achieve desired position and shape of the lower eyelid.

After the desired shape is obtained, excess amount of conjunctiva is excised.

A Case presented with a history of over-done lateral canthoplasty was treated with glamorous line procedure. 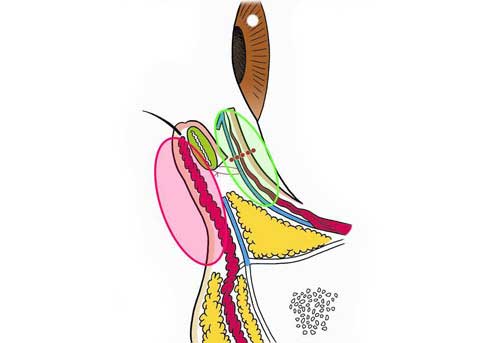 The glamorous line procedure makes the posterior lamella shorter, producing excess of anterior lamella, which may cause entropion. 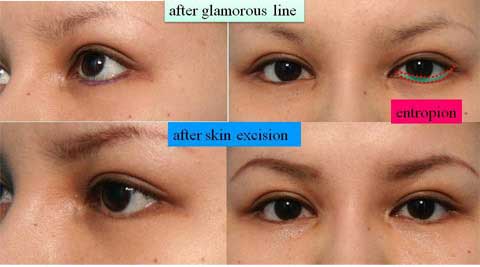 If entropion occurs after glamorous line procedure, it should be treated with simple excision of excess skin 1mopnth after primary surgery. 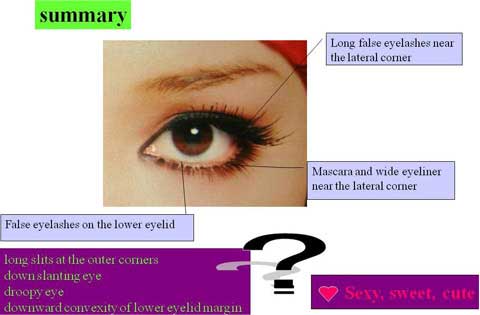 Although I am not sure whether eye with long slit at the outer corner, down slanting eye, droopy eye, or eye with downward convexity of lower eyelid margin can create sexy, sweet and cute looking, I am sure the following finds.