■The role of glabella augmentation for Oriental rhinoplasty

■The purpose of lower blepharoplasty

The role of glabella augmentation for Oriental rhinoplasty

The most common demand in rhinoplasty for Orientals is augmentation of the dorsum. Insertion of a silicone implant has been widely used for this purpose. 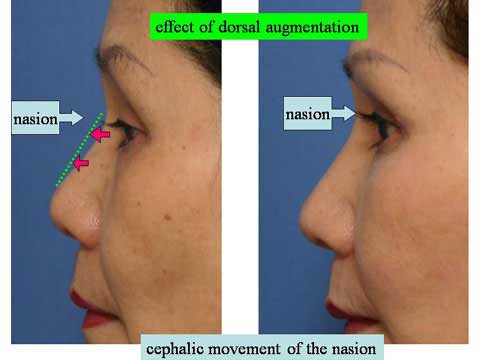 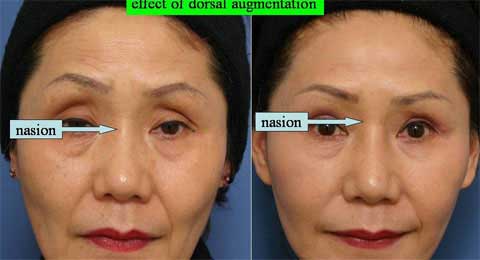 The dorsal augmentation increases the height of the dorsal line.

At the same time, it shifts the nasion to more cephalic position.

This means the dorsal augmentation alone can make the nose look longer. 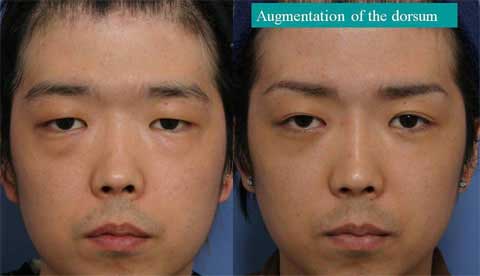 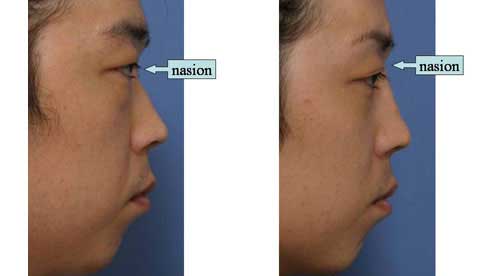 Thus, the dorsal augmentation may create an impression of nose being too long for those who have low dorsum with the nasion in an adequate or cephalic position. 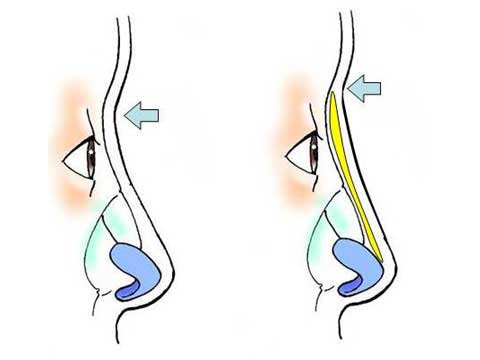 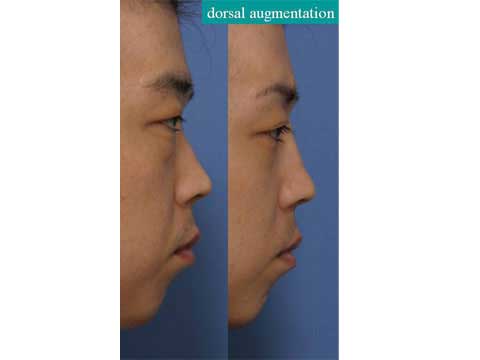 As I mentioned before, the dorsal augmentation move the nasion to the cephalic direction. 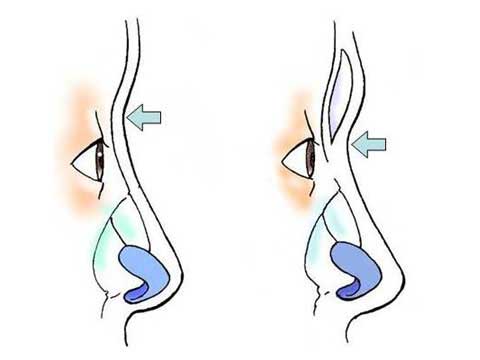 In contrast, the augmentation of the glabella can shift the nasion caudally. This paper presents our experience with use of glabella augmentation. 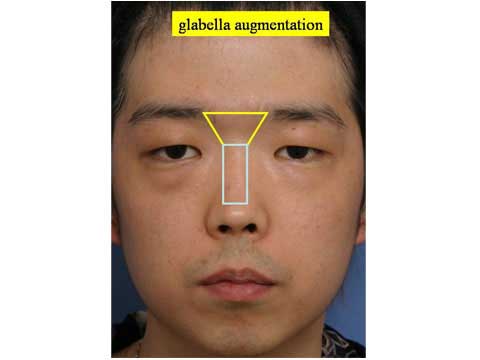 The width of the upper margin is 2 cm in most of cases but can vary from 1.5 cm to 4 cm depending on request. 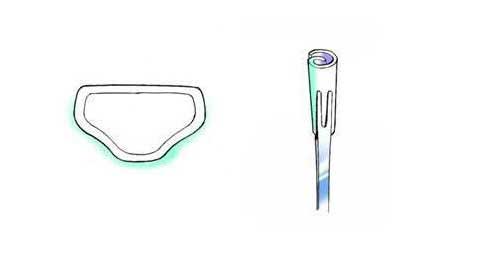 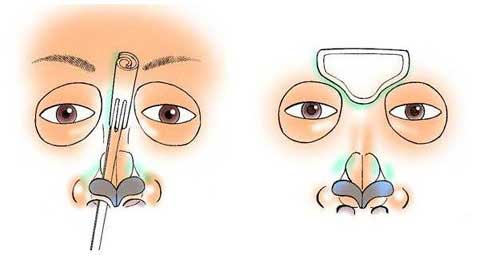 We have used a PTFE implant, which is inserted via endonasal approach or open rhinoplasty approach.

The folded implant is inserted into the subperiosteal pocket and unfolded using guided percutaneous sutures. The splint is applied for 1 week. 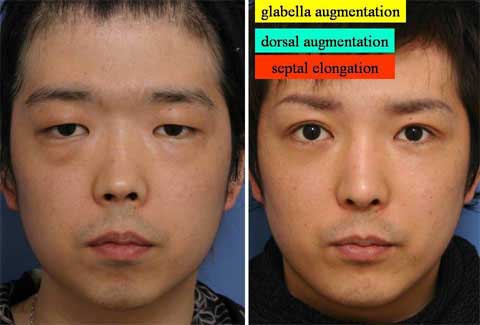 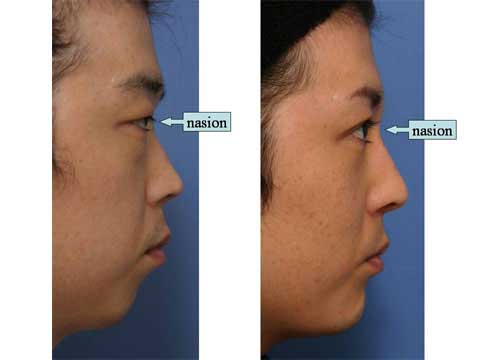 The augmentation of the glabella and nasal dorsum was combined in most of cases.

The combination of the dorsal augmentation and glabella augmentation resulted in enhancement of the nasal ridge from the eye brow to the nasal tip in the front view.

On the profile, the nasion was maintained at the level between the upper eyelid margin and pupil. 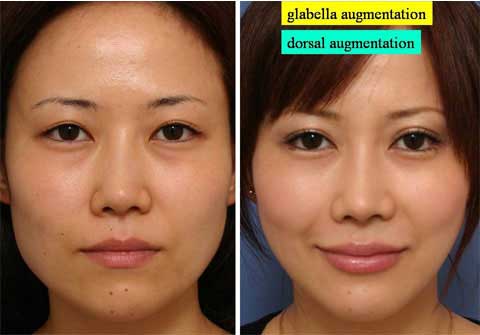 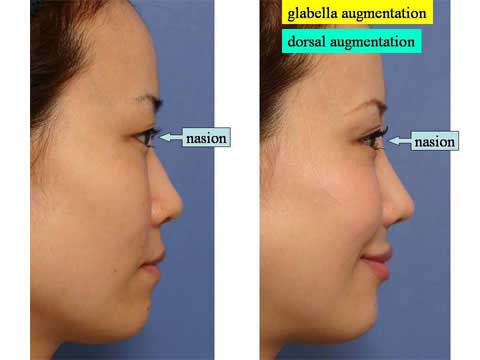 It is important to take into account the projection of the glabella and nasal root and the position of the nasion in case of augmentation rhinoplasty.

The glabella augmentation enhances the dorsal highlight of the nose, making the nose look long in the front view.

The details of announcement contents :

The purpose of lower blepharoplasty 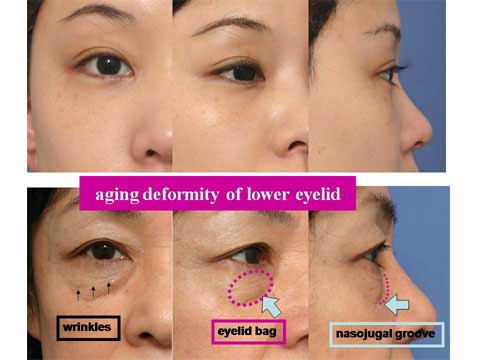 The aging signs of lower eyelid are skin wrinkles including fine wrinkles and pleates-like wrinkles and festoon, eye bag and nasojugal groove.

The purpose of the study was to clarify effects of the lower blepharoplasty to correct those aging deformities.

I have performed two different procedure for lower belpharoplasty. 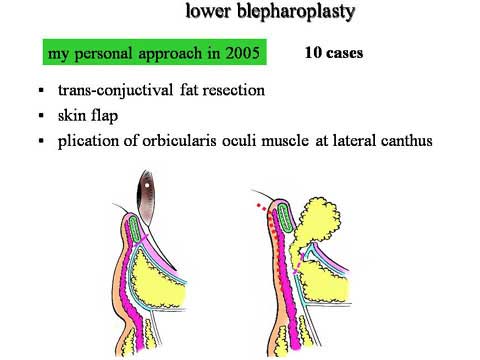 Therefore, I used transconjunctival approach to remove the fat and I dissected the skin only above the muscle.

I plicated the orbicularis muscle near the lateral canthus without any cut in the muscle.

In this way, I kept the orbicularis oculi muscle intact. 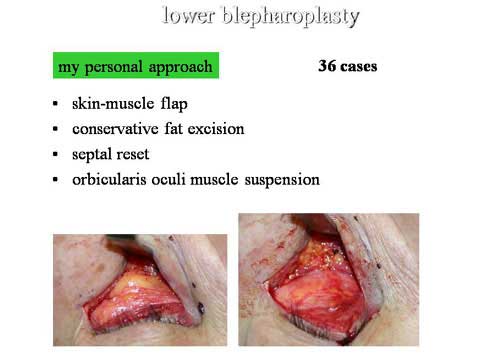 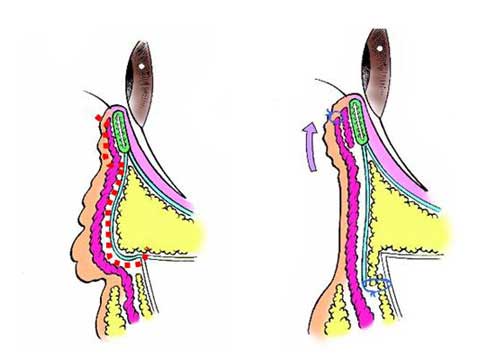 Another technique I used was elevation of skin-muscle flap.

The dissection was perfomed under the msucle in front of the septum.

I cut the septum along the inferior orbital rim.

The herniated fat was then excised and the septum and remaining fat was transposed downward to cover the inferior orbital rim.

This procedure is called septal reset reported by Dr. Hamara.

The orbicularis muscle flap is sutured to the lateral orbital rim for suspension.

The surgical outcomes were assessed in terms of wrinkles, eye-bag and nasojugal groove.

The evaluation was made particularly to answer the following 3 questions. 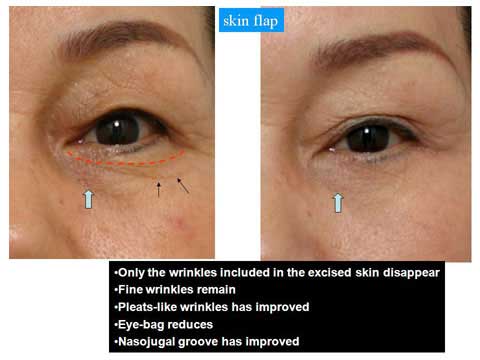 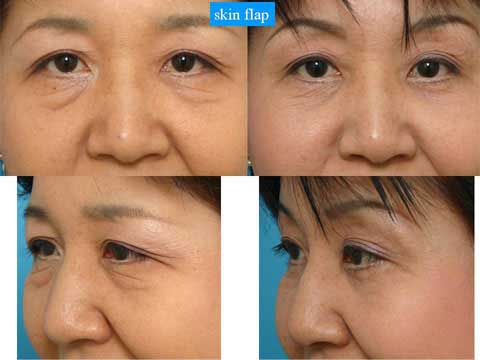 In skin flap group, the wrinkles which were seen in the excised skin disspaered.

Fine wrinkles in the remaining skin showed no change.

Pleates-like wrinkles which develop due to hanging and folding of excess skin just like festoon was improved. 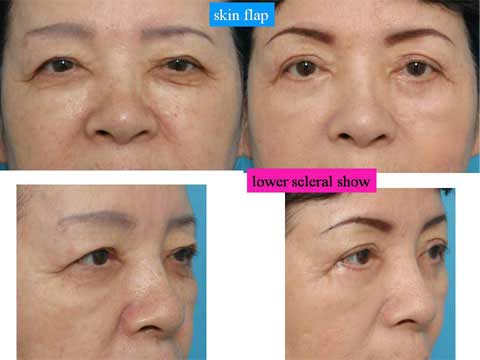 Although no incision was made in the muscle, she developed lower scleral show. 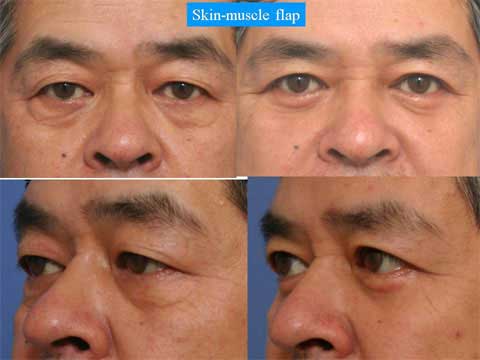 In the skin-muscle flap group, Festoon has improved.

The pretarsal bands are built up.

Eye-bag is reduced and nasojugal groove becomes shallow and smooth. 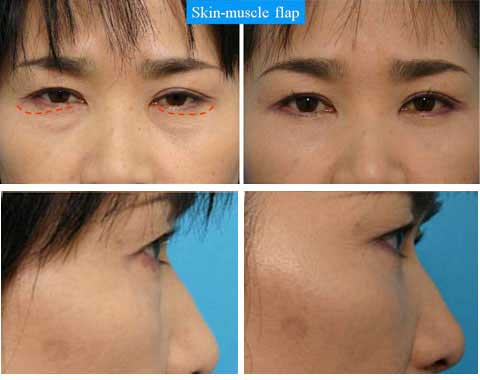 Only the wrinkles which were excised with skin disappeared. 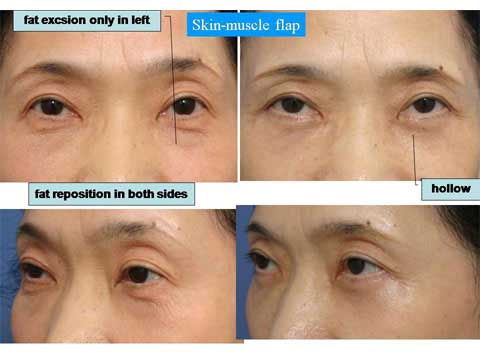 Before the surgery, the eye-bag was larger in the left side.

The bulging of right side was not remarkable.

I excised the orbital fat only in the left side and performed fat and septum reposition in both sides.

After surgery, eye-bag of both sides shows improvement.

The left side showed deeper hollow; however, the patient like the left side better than the right side.

Later she asked me to remove fat from the right side but it has not been done yet.

As you see, fine wrinkles remain. Wrinkles in the lateral region are cleared.

The nasojugal groove looks shallow and smoothed off.

The both techniques were found capable to correct the festoon, but neither of them was effective to improve fine wrinkles.

It was found that the nasojugal groove became shallower in the skin-muscle group.

The depth of the groove became even deeper in the skin flap group.

This difference was subtle clinically.

Both groups showed improvement of nasojugal groove and reduction of eye bag.

In addition, skin muscle flap with muscle suspension was more useful to create the pre-tarsal band (smiling band) and reduction of vertical dimension of the lower eyelid in the lateral portion.